Construction in Ireland continues to boom, with all sectors showing significant growth. CSO indices published for Q3 2018 show that the volume of output in building and construction increased by 19.9% on a year-on-year basis. 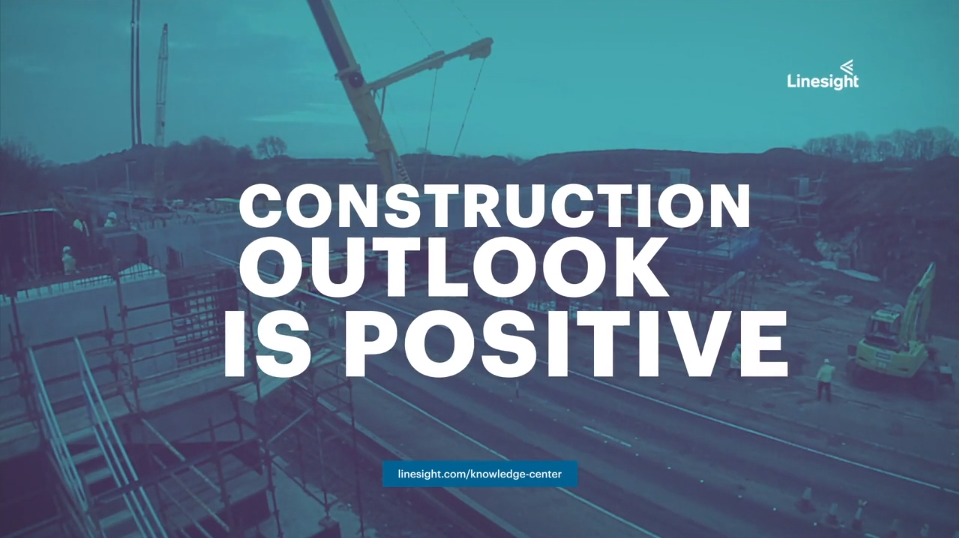 Derry Scully, Group President at Linesight, reviews the Irish construction industry performance in 2019 to date, and looks forward to what we can expect in the coming months.

The Irish economy continues to perform well with output this year still forecast to grow by close to 4%. However, there are some signs that the rate of growth is slowing down. There was an annual increase in employment of 2% or 45,000 people in the year to Q2 2019 bringing total employment to 2.3 million, but on a seasonally adjusted basis, employment decreased slightly over the previous quarter and the 2% year on year employment growth contrasts with rates of 3% to 3.5% in recent years.

The Government tax take for the first 8 months of the year was just over €35 billion, which was 0.7% ahead of budget projections and an 8.1% increase on revenues from the previous year. However, there are concerns that too much of this revenue is generated from an ongoing windfall of corporation tax paid by a small number of multi-national firms. Corporation taxes have more than doubled since 2015 and amounted to €4.9 billion in the first 8 months of this year, accounting for 14% of the overall tax take.

The slowdown in the Irish economy is demonstrated by several indicators. In August 2019 the KBC Consumer Sentiment Index fell to a 70-month low and stood at 77.2, down from a level of 102.4 a year previously. The AIB Manufacturing PMI hit 6-year lows over the Summer and has been in contraction for 3 months. In contrast, the AIB Services PMI is still showing consistent growth, albeit at lower levels than in recent years.

The overall slowdown in construction in Q1 2019, as measured by the CSO, reflects a decrease in civil engineering work of 9.9%, offset by an increase of 1.8% in residential building and a small increase of 0.1% in non-residential building. However, the Ulster Bank Construction PMI which is more recent would indicate that commercial activity is growing at a faster pace than this.

The Irish economy continues to perform well with output this year still forecast to grow by close to 4%. However, there are some signs that the rate of growth is slowing down.

Taking account of all factors, we are still holding to Linesight’s earlier prediction of an annual value of construction output between €22.5 and €23.5 billion, although the out-turn is now likely to be closer to the lower / mid-point of this range. This represents an annual increase in the value of output of approximately 11%. This level of output, while sizeable, will still represent just 60% of the €38 billion level at the peak of the boom in 2007.

The residential sector of the construction industry is finally showing a good growth pattern. This is the case for traditional housing schemes and, also, more recently, in the Build-to Rent and purpose-built student accommodation sub-sectors. Residential properties comprised 43% of investment in real estate in Ireland during the first half of 2019. Recent transactions bring the number of residential units owned by institutions to approximately 11,700, an increase of 25% since the end of last year, and this trend is continuing.

Activity in the commercial offices sector continues with many new schemes under construction and in the first half of 2019 the Dublin office market recorded more than 150,000 square metres of leasing activity. However, the number and scale of new office developments under construction or due to start construction has declined in 2019 compared to previous years.

In other commercial areas of construction, the retail market is slowing due to current uncertainties and the rise in online buying, while the hospitality market is doing well with a record of over 5 million visitors to Ireland in the first half of 2019. This is reflecting in new hotel and restaurant projects and refurbishment of existing stock.

In the industrial sector, the IDA continues to attract multinational companies to invest in Ireland, and there are many IDA backed projects currently under construction or in the pipeline, particularly in the data centre, micro-processing and pharmaceutical markets. Whilst the majority of these companies are US owned the IDA have had success in attracting companies from China and other countries also.

In the public sector, the Government is on track for a capital expenditure of €7.3 billion this year. This represents a significant increase of 23.6% over 2018. Last year, the Government published the new National Development Plan 2018–2027, which provides for expenditure of €116 billion to upgrade State infrastructure over the next ten years. Under this plan, public capital investment, as a percentage of national income, will move to amongst the highest in the EU.

These increases were driven primarily by increasing demand and skills shortages. The new Sectoral Employment Orders, increasing building standards, including the nZEB regulations, and the shortage of waste disposal sites also added to upward price pressures. Prices for the traditional trades of concrete, reinforcement and formwork are increasing, as are specialist subcontractor works for mechanical, electrical and glazing.

During 2019, we predict that input costs will increase by approximately 3%, as increases in labour and material costs continue. Tender prices, however, will increase faster, by an average of 6.5%, driven by the shortage of resources throughout the industry as the recovery continues, and construction output across both private and public all sectors continues to rise. A number of significant, large projects in the pipeline will also add to upward pressure on prices this year.

These percentage increases reflect a national average. Construction prices in the Greater Dublin Area and other major urban centres will increase at a faster rate, particularly for complex inner city projects, while increases in provincial locations will be more modest. The increase in tender prices, which we expect to continue for several more years, emphasises the importance of budgeting for future construction inflation when evaluating proposed construction projects.