Australia prides itself on its education system – with small class sizes, a high standard of facilities and a range of programs to support educational development, it is little wonder that the country is home to twelve of the top universities in the world, according to the Times Higher Education’s World University Rankings.

The education sector served as Australia’s largest single economic contributor at AU$37.6 billion in 2018-19, with year-on-year growth of AU$5 billion. The Australian Bureau of Statistics (ABS) data shows that for every AU$1 lost in university tuition fees, there is another AU$1.15 lost in the broader economy due to international student spending, showcasing how impactful changes in the education sector can be for Australia.

Turning our attention to primary and second level education, as of 2019, Australia had 3.95 million students enrolled in over 9,500 schools across the country. Of those, 65.7% were enrolled in public schools, which is indicative of the importance of establishing robust and competent public education infrastructure. Looking at New South Wales specifically, there were 1.2 million students in primary and secondary education last year, and 65.4% of those were enrolled in public schools. The graph below summarises the number of students per state/territory.

Total number of students (primary and secondary) by state/territory 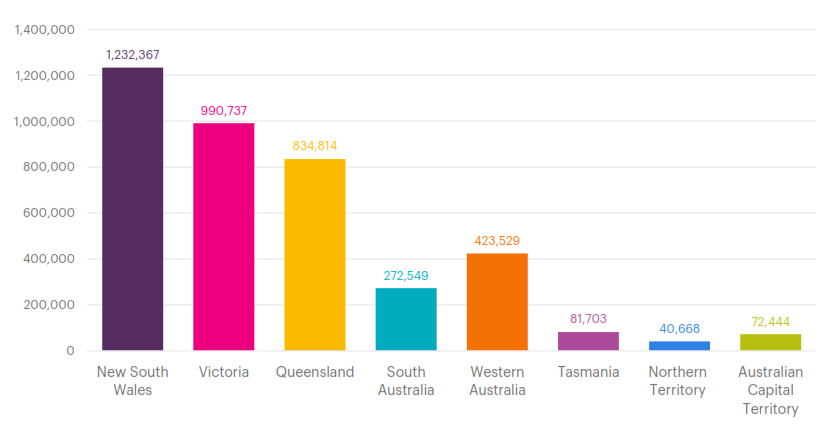 Schools Infrastructure New South Wales (SINSW) was established in 2017 to support future focused learning and population growth, as well as upgrading existing facilities to meet today’s educational standards. SINSW is aiming to deliver the largest investment in public education in the history of NSW, to the tune of AU$6.7 billion across the state between 2019 and 2023. Despite the wide-ranging consequences of COVID-19, SINSW published its delivery strategy in June 2020, reiterating its commitment to providing the best learning environments at public schools across NSW to meet the needs of a growing student population. Since 1st March, AU$300 million of construction contracts have been awarded or are currently being tendered, in line with this strategy, so it is full steam ahead for the sector in New South Wales.

Below we summarise two key factors that are coming into play in the development of these education facilities, in the face of the post-pandemic landscape.

Design for Manufacture and Assembly (DfMA)

SINSW is committed to exploring and employing the use of DfMA on its programme of works, having already earmarked 14 individual projects that are candidates for modular methodologies. It recognizes the core benefits of DfMA, noting them as:

While these benefits existed in our pre-COVID world, they have become more relevant in the current climate. With headcount constraints on sites as a result of social distancing measures, the opportunity to disperse the workforce across two or more locations (on-site and off-site) means that capacity will not necessarily be reduced, which in turn would have had an impact on the project schedule, progress and productivity. It will also help to minimize the time spent on-site in a live environment, which presents a considerable challenge anyway, without the added complexities of COVID.

The availability of land in metropolitan areas has posed a challenge for all sectors in Australia for some time, but a significant proportion of institutions are rethinking their expansion by moving outside the cities, to areas such as Western Sydney.

In order to service the predicted rapid population growth in these areas SINSW have adopted a procurement strategy of grouping projects into geographical clusters, which will have a number of key advantages. By adopting this more ‘high-density’ approach with regards to facilities, there are opportunities to take advantage of bulk purchasing powers and achieving economies of scale. It will also help to somewhat mitigate the challenge presented by the requirement to develop supporting infrastructure to the level required, as this can be developed around the clusters.

All in all, it is evident that the education sector in Australia is of considerable economic importance. Although COVID has taken its toll on the sector, as has been seen across the majority of other sectors worldwide, its potential is significant. Given the proportion of students attending public schools, it’s clear that the development of proficient, forward-thinking and scalable public education infrastructure is key. SINSW is a great example of the due attention being given and progress being made with regards to maintaining high standards across public education facilities, and despite the current climate, it has forged ahead with its delivery strategy with a view to developing the best learning environments possible, to secure continued success within the Australian education sector and system.